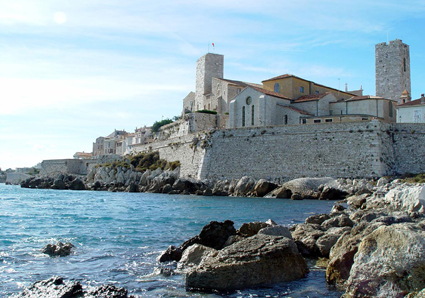 From Antipolis to Antibes

The history of Antibes Juan-les-Pins goes back several millennia. In 5th century B.C., after having founded Marseille (Massalia), the Greeks established a trading post which they named Antipolis, before creating the one in Nice (Nikaia). Antipolis became Roman of her own free will and experienced considerable growth. One factor of its economic development was the Aurelia road, one of the main routes used by the Gauls and which led through the city equipped with many monuments (theatre, amphitheatre, agora, thermal baths, aqueducts, triumphal arches…). It became an important emporium through which many ships transited, delivering wine, oil and ceramics. At the same time, the town made good use of local resources, in particular fish and salt. She produced several seasonings ensuring access to Roman tables, such as garum, a fish-based product left to ferment in the sun in salt water mixed with honey until fully dissolved: this was then filtered.

After Constantine’s reign, the Roman empire collapsed, leaving behind locally “the ruins of its fallen splendour.” Antipolis took the name of Antiboul and in 442, Saint-Hermentaire settled there, the town’s first bishop. But insecurity was rife and did not favour the economy, least of all maritime trade. Saracen hoards made frequent raids along the shore. In 1243, the pope Innocent IV decided to transfer the Episcopal see to Grasse, arguing that the town no longer met the necessary safety requirements for people and goods.

Once Provence was annexed to France in 1481, Antibes became the outermost stonghold of the kingdom, facing the County of Nice and the enemy Savoy states. As such, she was to find herself at the heart of the war waged between François 1st and Charles Quint for European domination. The town of Antibes, already ravaged in 1524 was besieged by land and sea in 1536 and sacked by a powerful and experienced army of 50,000 men, supported by Andrea Doria’s fleet won over by Charles-Quint. François 1er was to show his appreciation for the attitude of his subjects, confirming their privileges in June 1538.

During the latter half of the 16th century, Provence was a bloody battlefield. The Wars of Religion coincided with a new foreign invasion led by the King of Spain, Philippe II. His ally, the duke of Savoy, besieged Antibes, which was sacked once again. So Henri IV sent along the Duke of Epernon, who won back the town on 6th December 1592. Henri IV’s conversion and the promulgation of the Edict of Nantes interrupted hostilities. In 1600, Antibes welcomed Marie de Médicis, new queen of France, come from Italy in order to join her new and royal husband.

Louis XIV entrusted the famous military architect Vauban with the reinforcement of the city’s defences. Vauban redesigned the fortifications, before the town experienced the worst siege of its history in 1746, during the war of the Austrian succession. Under the leadership of Joseph-David, count of Sade and commander of the stronghold, for 57 days Antibes heroically resisted the onslaught of 2600 bombs and 200 Austrian firepots. On 1st February, the siege finally ended and the valiant defenders hailed the vanguard of the liberating army with cries of “Vive le Roi!” (Long live the King).

Antibes and the Empire

The revolution was rather calm in Antibes, where young General Bonaparte settled his family before distinguishing himself during the siege of Toulon. Once he became Emperor Napoleon, he had many faithful followers in the stronghold. Some even became important members of State, starting with Marshal Masséna, «enfant chéri de la victoire» (dear child of victory), and Marshal Reille… This explains why, when Napoleon escaped from Elba Island and landed at Golfe Juan on 1st March 1815, he intended to land in Antibes. But times had changed and so had the people of Antibes. They reserved a cold welcome and the emperor was obliged to avoid the city which no longer wanted him… As a reward for her loyalty, Louis XVIII gave back to Antibes her title of “Bonne Ville” (good town) which the emperor had annulled. She also gained her new coat of arms. Closely fought over for many years by France and the House of Savoy, the county of Nice became French for good in 1860. Having thereby lost all her strategic importance, cramped within her rampart walls rendering any expansion of the city impossible, Antibes knocked down part of these in order to open out onto the surrounding countryside. Thus began the fabulous expansion towards Cap d’Antibes, which favoured the development of horticulture, followed by the creation in 1882 of the seaside resort Juan-les-Pins which, thanks to the phenomenal growth of tourism on the Côte d’Azur, was to become the biggest fashionable summer destination of the coastline, welcoming the international elite from political, high society and artistic circles (Fitzgerald, Picasso, Marlene Dietrich, the Kennedy family etc.) In fact, the great adventure of Juan began after the First World War. Traditionally deserted during the hot summers months, the resort took on a summer rhythm thanks to visitors from America, land of the free. Amid the pine groves and a few discreet villas, Frank-Jay Gould, heir to the tycoon of the American railway, launched the first big and fashionable summer seaside resort. In partnership with the Frenchman Edouard Baudoin, one of the developers of Deauville, he bought the old casino by the sea and transformed it into one of the most beautiful and active casinos of the Côte d’Azur, welcoming members of the high society and the intellectual elite: Scott Fitzgerald, Charlie Chaplin, Marlene Dietrich, John Dos Passos, Picasso etc. Cap d’Antibes and Juan were to inspire Francis-Scott Fitzgerald’s most famous novel, Tender is the night, but also another of his masterpieces: Tales of the Jazz Age.. In May 1927, Frank-Jay Gould opened le Provençal, the first big luxury hotel of the Côte  d’Azur, which became the driving force of Juan along with the casino. From then on, Juan-les-Pins has become a trendy resort and over the years and seasons, it has never ceased to shine as one of the most famous and popular seaside resorts in Europe.